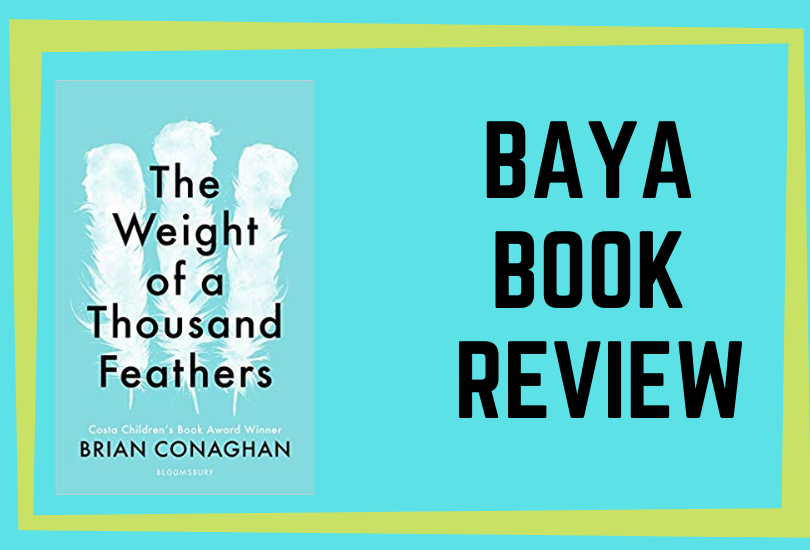 Seventeen year old Bobby Seed has the crushing responsibility of being the caregiver for his mother who has MS (multiple sclerosis) and his younger brother Danny who has some cognitive problems of his own. In many ways Bobby is your average teen, with the standard experiences of having to friend zone his only friend Bel, balancing school, exams, and what his next steps will be after graduation. His other experiences and responsibilities are more challenging; not many teens have to spoon feed, bathe and otherwise clean their parent. Initially Bobby gets some relief when he joins a support group for teen caregivers that meets in the evenings. But things becomes complicated when he starts to fall for the Vespa driving American named Lou. Add on to that a seemingly impossible request from his mom and Bobby suddenly has the weight of the world, or a thousand feathers, bearing down on him.

Conaghan employs the utmost sensitivity when describing the caregiving experience and the inevitable end to Bobby’s mom’s life. It is difficult to find fault with that part of the story. Some of the writing is quite beautiful including Bobby’s poetry and the dark humor that fuels the interactions between he and his mom are great. The complicated relationship between Bobby and Bel (Bel could easily have her own book) and his evolving understanding and relationship with his brother are also well-written. The biggest issue with the title is the character Lou who is clearly meant to be unlikeable. While Lou plays an important role in Bobby’s exploration of his sexuality and his relationship with his friend Bel, Lou’s behavior was not 100% believable. All characters are presumed white, and Bobby is gay. Overall a solid title that fills an underexplored niche in young adult fiction.

Join us via Zoom for our January 2023 Meeting.

Members will receive an email with a link. Non-Members wishing to join should reach out to Shel Grinstead to receive the link.