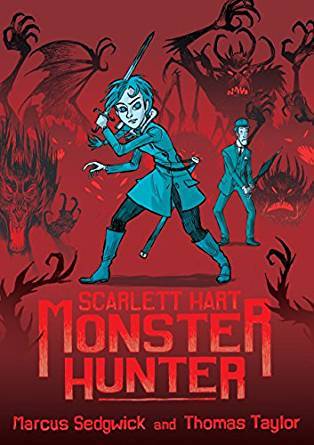 Scarlett, the orphaned daughter of legendary monster hunters is doing her best to honor her parent’s legacy with the help of her loyal butler. Whether it is a giant monster from the river or living gargoyles or something else, she is on the case. But her parent’s arch-rival Count Stankovic keeps stealing her bounty. And then to make matters worse he rats her out to the Royal Academy for the Pursuit and Eradication of Zoological Eccentricities for being an underage eradicator. But when her city is hit with a plague of monsters she decides she must get to the bottom of this surge of dangerous monsters before it is too late.

A departure from his usual fare, Sedgwick delivers a fun madcap adventure set in merry old England. This graphic novel has an all-white cast and plenty of trope including the committed butler/maid duo, the mansion full of monster-killing gadgets and crazy cars. But these tropes add rather than detract from what is a fairly simple plot. In short: kill the monsters save the homestead, foil the Count! It will be great for middle school readers, but unlikely to have a heavy teen following.

Join us via Zoom for our January 2022 Meeting on Making the Case for Teen Services, Presented by Erik Berman.